A Better Answer to “Who Am I?” 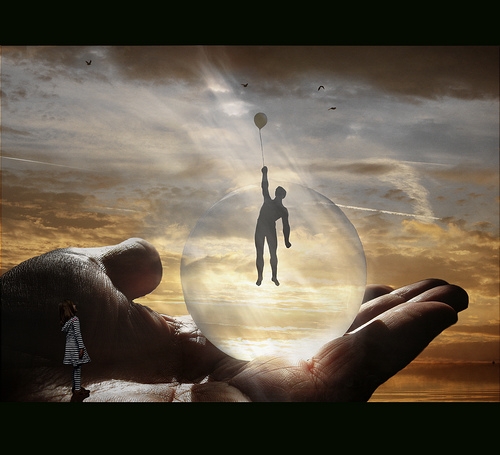 It’s strange that we use the word “I” more often in a day than any other word except “a” and “the” without really knowing who “I” is. Ancient thinkers, both East and West, considered the self to be the highest mystery. The ultimate question, then, is “Who am I?”  For most people, however, the question isn’t something they dwell on. But think of the bedtime prayer that every child learns, the one that begins “Now I lay me down to sleep.”

When you get to the phrase “if I should die before I wake,” you’ve hit upon something incredibly urgent. Your “I” arrived on the scene when you were born, but will “I” disappear when you die? In the Indian tradition nothing is more urgent than to reverse the wording. “If I wake before I die” is all-important. It expresses the state of enlightenment, and with it the assurance that “I” is more permanent than death.

The issue isn’t just Indian but universal. Let’s see if we can get the experience of intellectual enlightenment right this minute, simply by redefining “I.”

The casual belief that “I” is very easy to define comes from everyday life. Everyone uses the word all the time, which gives a false sense of security. “I” is the first person, the experiencer. We hang all kinds of labels on it: I am Indian, a doctor, a male, a father, husband, and brother. But in times of personal crisis, such as severe grief or depression, these labels become hollow. “I” feels desolate and alone, owning nothing but a handful of ashes.

Is there another “I” who isn’t so fragile, whose sense of self can’t be stripped away by loss? There’s a feeling of “I” that doesn’t depend on what is happening right now, whether the experience is good or bad. It simply exists. In the Upanishads there’s a lovely image of two birds sitting in a tree. One eats the fruit of the tree while the other looks on silently. The two birds, mated for life, are the self, and the one who looks on silently, sometimes called the witness, is the aspect of “I” that doesn’t depend on acting in the world.

The reason this ‘I” is so difficult to experience isn’t hard to see. Everything anyone does in a day can be reduced to four possibilities:  I think, I speak, I feel, I act. In other words, “I” always gets attached to something else, and all of us spend 99% of our lives valuing the other words – “think,” “speak,” “feel,” and “act” – while taking “I” for granted. The sensation of “I” is simply a given because existence is a given.

Reread Hamlet’s soliloquy “To be or not to be,” which is all about the possibility of not existing after you die, and you may not have noticed that in 35 lines the speech doesn’t use the word “I.”  This isn’t accidental. When you get serious about existence, which is boundless, the limited, bounded “I” no longer works; you need an unbounded “I” to truly experience the state of being.

To know, without a doubt, that “I” is limitless, totally free, and untouched by birth and death is the state of intellectual enlightenment. (The “intellectual” gets dropped once you actually go deep inside and experience the unbounded “I.” That is enlightenment beyond the thinking mind.)

What holds us back from enlightenment is a set of false beliefs, prejudices, second-hand opinions, and personal illusions. There’s a wonderful moment in the book I Am That where the guru Nisargadatta Maharaj is confronted by a troubled young man who is haunted by the fear of death. He wants to be rid of this fear but doesn’t know how.

“Your problem is that you believed your parents when they said you were born,” Maharaj replies. “Death is attached to the illusion of birth. In reality you cannot imagine a time when you didn’t exist or a time when you will no longer exist. There is the opening to escape the fear of death.”

This advice comes from pure intellectual enlightenment. There are other arguments that can be used to appeal to the rational mind:

–        “I” usually refers to someone inside your skin, but it cannot be located the way the brain, liver, and heart can be located. “I” has no definite region of activity in the brain. When a toothache dominates your sensations, “I” is in the tooth. When you are in love, “I” is in the heart. In so-called out-of-body experiences, “I” extends beyond this package of skin and bones. So assuming that “I” is inside your body is just that, an assumption, not provable as fact.

–        The only reason that “I” exists in a specific time and place is due to a construct of the mind. It’s like longitude and latitude. A ship is lost at sea until the navigator specifies a point on the map defined by longitude and latitude.  This position is the creation of map-makers, an intellectual construction that makes sailors feel secure.  “I” is like that. We feel secure knowing that “I” lives at a certain address, but in truth “I” sails on the open seas of existence.

Where do these arguments actually get us? To a much better place. The great suffering of the world can be traced to the need to defend “I” against “you,” “us” against “them” in a war based on a belief in the narrow, limited self with its cravings and fears. In the world’s wisdom traditions, releasing yourself from this troubled “I” is the key to peace, freedom, and a total absence of fear.

In reality “I” is pure consciousness, a state of being vaster than the universe. The journey to reach the unbounded “I” has always been considered the ultimate adventure. Once you step on the path you will steadily lose the insecurity of the everyday “I,” and in time you will answer “Who am I?” by uttering a timeless truth: I am the universe. Anything less is unworthy of being human.

Deepak Chopra, MD is the author of more than 75 books with twenty-two New York Times bestsellers including What Are You Hungry For?.  Join the weightlessproject.org to eradicate obesity and malnutrition.