Why You and the Universe Are One 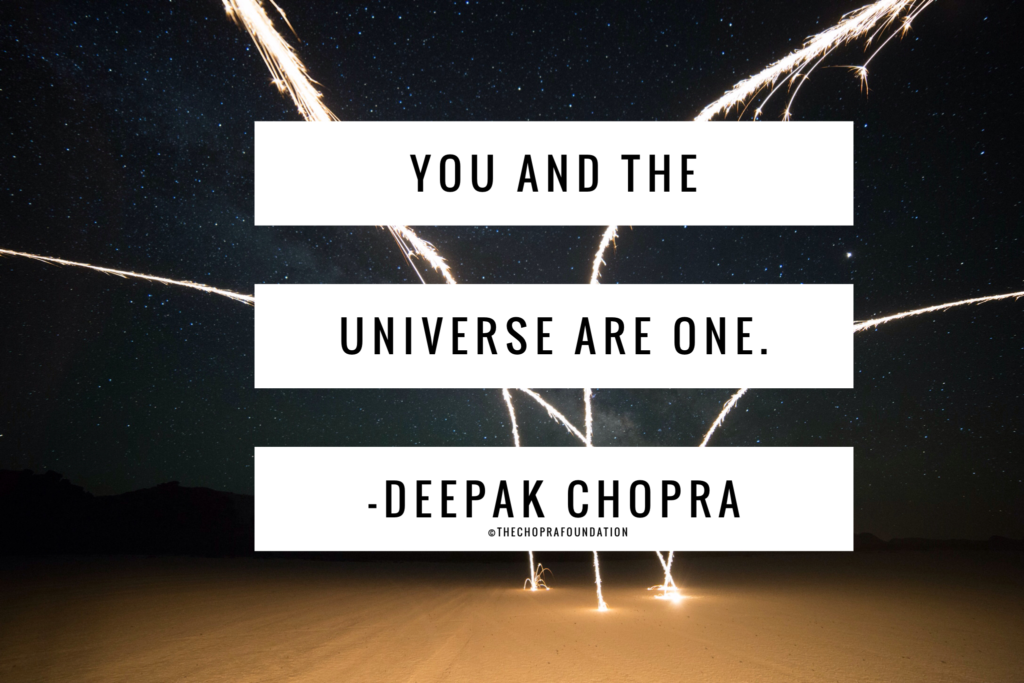 It takes a lot to overturn the accepted view of reality, but it doesn’t take a lot to begin. The accepted view of reality holds that human beings exist in the context of a vast physical universe “out there.” Only an extreme mystic would doubt this description, but all of us should. Sir John Eccles, a famous British neurologist and Nobel laureate, declared, “I want you to realize that there exists no color in the natural world, and no sound – nothing of this kind; no textures, no patterns, no beauty, no scent.” What Eccles means is that all the qualities of Nature, from the luxurious scent of a rose to the sting of a wasp and the taste of honey, are produced by human beings. Erwin Schrödinger, one of the main founders of quantum mechanics, said essentially the same thing when he declared that photons, quanta of light, have no color, such properties arise in the biology of perception.

Those are remarkable statements, all the more because they are all-inclusive. The most distant galaxies billions of light years away, have no reality without you, because everything that makes any galaxy real— with the multitude of stars with their heat, emitted light, and masses, the positions of the distant galaxies in space and the velocity that carries each distant galaxy away at enormous speed—requires a human observer with a human nervous system.  If no one existed to experience heat, light, mass, and so on, nothing could be real as we know it. If the qualities of Nature are a human construct arising from human experiences, the existence of the physical universe “out there” must be seriously questioned–and along with it, our participation in such a universe.

When you break experience down into its tiniest ingredients, the physicality of everything begins to vanish. The story we keep telling ourselves depends on reality “out there” having a physical explanation, but it doesn’t. For example, we depend on sight to navigate through the world. No matter what you see “out there”—an apple, cloud, mountain, or tree—light bouncing off the object makes it visible, but how? No one knows. What makes seeing totally mysterious can be summed up in a few undeniable facts:

At present no one can explain how invisible photons being converted to chemical reactions and faint electrical impulses in the brain creates the three-dimensional reality we all take for granted. Brain scans pick up the electrical activity, which is why an fMRI contains patches of brightness and color. So something is going on in the brain. But the actual nature of sight itself is mysterious. One thing is known, however. The creation of sight is done by you. Without you, the entire world—and the vast universe extending in all directions—can’t exist.

Expand this known fact to everything you experience, and every quality of life requires human participation. “Requires” means two things, first, that experience is the ground state of everything, including the activity of doing science, and second, that every quality is a human construct derived from experiences of individuals in human species. Another species with a different nervous system would participate in the universe in a way completely unknown to us with our human nervous system.

Physics has had decades to process the insight of John Archibald Wheeler, the eminent American physicist, general relativist and quantum physicist, who originated the notion of a “participatory universe,” a cosmos in which all of us are embedded as co-creators, replacing the accepted universe “out there,” which is separate from us. Wheeler used the image of children with their noses pressed against a bakery window to describe the view that kept the observer separate from the thing being observed. But in a fully participatory universe, the observer and the thing observed are one.

You are one with the universe because you experience Nature in your awareness, and there is no other source for reality as we know it. If anything is real that cannot enter human consciousness, we will never know it. How would we even know it? Even if we resort to abstract mathematics which might infer the existence of realities beyond our ability to sense them or measure them, we should realize that mathematics itself, albeit the most refined one, is tied to human observers. It takes a mathematician to understand mathematics. To summarize,

These are difficult truths for mainstream scientists to accept, and some would react to them with skepticism, disbelief, or anger. But following the other track of explanation, beginning with physical objects “out there,” fails utterly to explain how we are conscious to begin with. That’s why in scattered pockets, some physicists are beginning to talk about a conscious universe, where consciousness is a given throughout Nature. In fact, the founders of quantum mechanics a century ago agreed more with this view, having understood that quantum mechanics implies observation and agency of mind. In our upcoming book You Are the Universe, we call it the human universe, emphasizing where the whole construct comes from. As we will see in future posts, once you realize that you and the universe are one, the whole journey of being human shifts radically.

Deepak Chopra MD, FACP, founder of The Chopra Foundation and co-founder of The Chopra Center for Wellbeing, is a world-renowned pioneer in integrative medicine and personal transformation, and is Board Certified in Internal Medicine, Endocrinology and Metabolism.  He is a Fellow of the American College of Physicians, Clinical Professor UCSD Medical School, researcher, Neurology and Psychiatry at Massachusetts General Hospital (MGH), and a member of the American Association of Clinical Endocrinologists. The World Post and The Huffington Post global internet survey ranked Chopra #17 influential thinker in the world and #1 in Medicine. Chopra is the author of more than 85 books translated into over 43 languages, including numerous New York Times bestsellers. His latest books are Super Genes co-authored with Rudolph Tanzi, PhD  and Quantum Healing (Revised and Updated): Exploring the Frontiers of Mind/Body Medicine.  www.deepakchopra.com

Menas C. Kafatos is the Fletcher Jones Endowed Professor of Computational Physics, at Chapman University. He is a quantum physicist, cosmologist, and climate impacts researcher and works extensively on consciousness. He holds seminars and workshops for individuals, health and mental professionals, practitioners of contemplative traditions, and corporations on the natural laws that apply everywhere and are the foundations of the universe, for well-being and success. His doctoral thesis advisor was the renowned M.I.T. professor Philip Morrison who studied under J. Robert Oppenheimer. He has authored 315+ articles, is author or editor of 15 books, including The Conscious Universe (Springer), Looking In, Seeing Out (Theosophical Publishing House), and is co-author with Deepak Chopra of the forthcoming book, You Are the Universe (Harmony). He maintains a Huffington Post blog. You can learn more at http://www.menaskafatos.com