The Ultimate Self-Help: Upgrading the Illusion 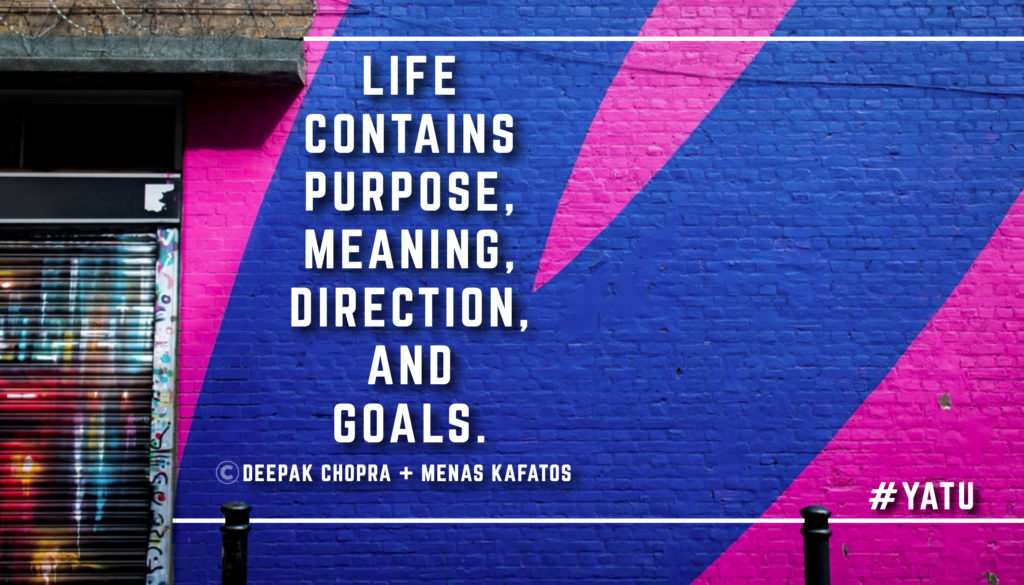 The phrase “personal reality” has a range of meanings, and most people would begin with their situation, the place where they find themselves. There’s a natural impulse to improve the situation, whatever it happens to be. If your situation lacks enough money, satisfying work, a loving relationship, and so on, it will improve your personal reality to work on those things. That’s about as far as society tells us we can go. On a larger scale, one person can make a minuscule difference by casting a vote for President or deciding to recycle, but big or small, personal reality has a big outer component, consisting of the external world, other people, natural forces, and so on.

It seems so obvious that there is a “big” reality compared to which anyone’s “small” reality is fairly insignificant. But this small reality is personal, so we all spend a huge amount of time and effort trying to upgrade it–all of our life, in fact. So it’s mystifying to run into the world’s wisdom traditions, which perversely turn this whole idea upside down, claiming that the “big” reality is actually a snare, a trap, an illusion. That’s the gist of the Sermon on the Mount and the teachings of Buddhism, different as they are when taken as religions. In my new book, You Are the Universe , written with physicist Menas Kafatos, we look very closely at how to upgrade personal reality from the ground up, a process that begins with solving the whole mystery of reality.

The way that people live their everyday lives, the “big” reality of planets, stars, galaxies, the big bang and so on exists “out there” as the fixed matrix that we little human beings inhabit, the way a microbe might inhabit a test tube, except that the “big” reality is infinitely vaster than a test tube and humans, by comparison, are infinitesimally smaller than microbes. Calling this matrix an illusion seems irrational, but in fact it’s quite easy to do. Hold a piece of chocolate in your hands. In our minds we hold a concept, “a piece of chocolate,” that is nothing but a name for the actual object, which is a set of experiences. The chocolate is soft, sweet, sticky, brown, etc., and each quality is experiential.

All experiences occur in our awareness, an obvious fact when you think about it. The sweet taste of chocolate, for example, depends on tasting it, and taste occurs in consciousness–in ordinary terms we’d call it a subjective experience. This fact doesn’t seem to have radical implications, because tasting a piece of chocolate doesn’t challenge the supremacy of the “big” reality of objects outside our inner, subjective world.  But consider your hand holding the piece of chocolate. You also know it through experience. A hand is warm fleshy, movable, rough or smooth, dark or light-skinned. This means that your hand is real only as an experience in your awareness.

When you make this point, defenders of the “big” reality get annoyed or worried, because once you convert a hand into an experience in awareness — and nothing else! — anyone can see where you’re going. Any object “out there” suddenly gets sucked “in here,” into the world of consciousness. A mountain, cloud, building, or electron can be described in the same terms. Take any quality it exhibits, and that quality is reducible to an activity in human awareness. Some would insist that this mode of knowing reality is inferior, or wrong-headed, when compared to the hard facts of science. However, almost a century ago the great quantum physicist Werner Heisenberg pointed out that atoms and molecules have no fixed qualities at all; they are perceptual artifacts interpreted by the human mind. Moreover, Heisenberg said, Nature is inconceivable, because it displays any result tailored to the questions you happen to pose.

The upshot is that once you know that the “big” reality isn’t big at all, that everything of any size is constructed in human awareness, and that Nature offers the results we ask for, personal reality is revolutionized. Suddenly, each of us is creating our own reality in the only place anything can be created: awareness. In You Are the Universe  this argument is carried out in detail, which helps to make it less mind-bending.  But let’s stick with the mind-bending part for now. If there is no fixed reality “out there,” neither in the domain of galaxies or the domain of subatomic particles, it’s an illusion to rely on it. We should be relying on the creative source of things, our own awareness. Imagine that you are watching a movie and you don’t like its sad ending. You don’t rush at the screen and start to bash the images being projected on it. You phone the studio–if you are a Hollywood big shot–and tell them to reshoot the ending to make it happy.

In this way, you upgrade the illusion. Everyone accepts that movie images are illusions projected on a screen. Most of us do not realize that for thousands of years in various wisdom traditions, the “big” reality has been considered to be an illusion projected on the screen of awareness. It comes as a jolt to adopt this viewpoint, and while some would angrily attack the whole thing as preposterous, weird, mystical, metaphysical, or deranged, someone who is more practical might ask, “What does it get me?” The answer is two-fold.

Most people would choose door No. 1, out of the natural impulse this post began with, the impulse to improve their situation. This impulse bears rich fruit, because when you go deep enough into your awareness, you discover that the most primal qualities of consciousness are creativity, love, joy, evolution, and intelligence. Having arrived at their source, your interaction with the world is forever altered, simply by changing your interaction with yourself. Now you find that any experience can be imbued with these primal qualities–the ultimate self-improvement is in your hands.

Why, then, would anyone pick door No. 2 instead? It turns out that awareness has an even deeper quality to reveal: knowing. To be conscious is to know. This is built into the very fabric of our being. In life, we aim our knowingness outward all the time. I know my house, you know yours. I know my profession, somebody else knows theirs. But all of this outward-aiming leads to fantastic creations, in fact to the entire human world, civilization, art, science, etc. In the end, however, one fact is paramount: consciousness doesn’t need to look anywhere else. It knows only itself, and in this simple fact you hold the absolute key to creation in your hands. From this point onward, there is no need to upgrade the illusion. You don’t phone the studio to ask for a happy ending, because the whole scheme of duality–happy versus sad, good versus bad, life versus death–is simply the play of consciousness, and you are that consciousness.

To arrive at such a conclusion, which for thousands of years has been called enlightenment or awakening, requires a personal journey, which is unavoidable. The illusion of the “big” reality has sunk its hooks into all of us. We are stuck in a forgetful state, believing that reality “out there” has the upper hand, while human beings are a puny but very lucky accident in a random universe. My point here, and in the book, is to overturn this assumption. Life changes enormously once you see that assumptions don’t have to push you around. But there’s a second point, too. Door No. 1 is about upgrading the illusion; Door No. 2 is about escaping the illusion. These turn out to be false choices, because they carry duality, the world of either/or, too far.

In truth, you can be in a state of awareness that upgrades the illusion while at the same time not buying into the illusion. That is, you know who you really are–pure being pure awareness–but that doesn’t mean you abandon life and its infinite possibilities. Quite the opposite–knowing who you really are, an entirely new life begins, richer and filled with more possibilities than ever. This is what it really means to be in the world but not of it. You see beyond the concepts of birth and death. Knowing that you are unborn and undying, the images projected on the screen of awareness hold no threat, and with the ultimate fear gone, nothing remains but life eternal. The miracle is that this eternal state is here and now, readily accessible to anyone.